What are they really thinking?

Windows Into The Soul
Voted one of the TOP TEN Mentalism Releases of 2015!

As I read 'Windows Into the Soul' I kept thinking to myself, yes, that’s right! Even though I suppose a lot of what I do and believe is simply learned from many years of performing, and not really thought about. But seeing this subject all laid out neatly and expertly was wonderful! And reading it all really drove home how important all phases of body language are and how to not take anything for granted.

"David: you did a great job of organizing all the different aspects in both the spectator’s body language and the performer’s and really created a learning tool that is invaluable to the working mentalist.  I really loved it! Congratulations!"
Richard Osterlind, Corporate Mentalist
MORE Reviews

Windows Into the Soul: In The Beginning... 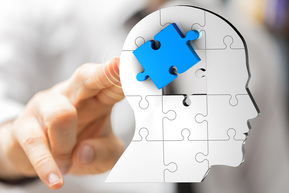 “If she twirls her hair while you’re talking to her, she likes you.”

That sentence burned itself into my feverish 15-year-old mind but, in a small way, it also changed my life.

That change started with a deliciously intriguing ad in a magazine...an ad so tantalizing that I soon found myself at a post office sliding a hard-earned two-and-a-half dollar American money order into an envelope. In return, the ad had promised to unveil to me life’s most urgent mystery: what girls are really thinking.

The object of my obsession found its way to me one blustery winter afternoon. It came in a plain looking package, a slender pulpy book with the title “How to Read Body Language.” On the cover, a beautiful girl in a plaid skirt, come hither eyes and ringlets of blonde hair falling across her face.  Her legs are crossed and she’s looking back at the camera with an enigmatic half-smile. There is a pencil placed between full red lips and just a hint of a “boy you could get really lucky tonight” expression. (It wasn’t hard for a 15-year-old to interpret that body language.)

I read that book over and over again. I made notes. I grilled myself on the “never fail” body language signposts.  Pursed lips? She’s thinking about kissing you! (Advice: go in for THE kiss right away.) A slightly open mouth means she is attracted to you. If she crosses her legs and balances her shoe on the end of her toe, you just won the lottery. You get the idea, right?

Besides the book, I had also bought a pair of x-ray specs. Unfortunately, the specs turned out to be one of life’s hard lessons: advertisers lie. So, I poured all my energies into learning body language. Why? I realized one afternoon in a thunderbolt-from-the-heavens moment that people lie all the time with their mouths, but they don’t have the faintest idea how to lie with their bodies.

In other words, with a mere several hundred hours of obsessive practice and study, hundreds more hours of hard work and considerable memorization...it was possible – just possible -- that I could know with reasonable certainty if and when a girl would be open to kissing me.

That experience opened a lifelong fascination and a series of small but steady payoffs using my ability to consciously read body language.

I put myself through college selling shoes on commission...and I would watch for the customer to lean forward or lick their lips; then I would know it was time to press for the sale. I knew when people stroked their chins they weren’t quite sold because they wanted more information...or were trying to phrase a question and might need a little help realizing how much they really needed to buy those shoes.

Years later, as a reporter, I found someone who covered their mouth or pursed their lips when answering questions highly suspect...and a man who was continually straightening his tie was uneasy with where the interview was going.

Years later, performing close-up magic, I found myself being aware of my spectator’s feet.  (Yup, feet.) Were they pointed my way? If so, they were probably engaged in what I was doing.  If the feet were pointed away from me, I knew I’d better do something to bring them back, because the spectator was thinking about leaving.
As a mentalist, the observation of body language has been invaluable.

On stage, for example, I realized that the way I stood in those critical first thirty seconds, how I regarded the audience, would lead them to make instant judgements about who I was and whether or not I was worthy of their attention. (Mentalist Bob Cassidy has written extensively about this.)

I also learned that the way I gestured with my hands when explaining an idea to my audience could make the difference between how quickly they understood the information I was sharing...and whether or not they were likely to buy what I was talking about.

I learned that presenting two hands with the palms up to the audience in a “nothing to hide here” gesture led them to relax and stop watching me so closely. (I also learned that this gesture could be particularly useful when I was in the process of hiding something.)

I learned how to put a stressed volunteer at ease by raising both eyebrows at the same time and smiling at them in the universal “invitation” expression. I also learned that an unexpectedly difficult volunteer was easier to control if I moved into their personal space and put my arm across their shoulders to remind them that I was in charge.

I learned people who smiled at me with smiles that didn’t reach their eyes weren’t really smiling and that a tug of the mouth to one side usually meant that what I was doing wasn’t working for my audience and I needed to change my presentation if I was going to keep their attention.

I could tell who the “alpha male” was at a table (not always the boss...or a male, by the way) by watching where the people looked after I’d made a joke...almost as though they were asking permission to laugh. And I also knew the key to winning over small groups was to play to the alpha male because winning his approval led to approval from the whole group…so I would make him the star of the first effect, typically a center tear or drawing duplication.

Doing stage shows, I learned that recognizing expressions that flickered across a face could mean the difference between presenting a standard routine and performing the kind of effect that gets audiences out of their seats, standing and applauding.

The study of body language helped me win my first kiss, but on a more serious note, I’m hoping you’ll use it to earn your first million! (I am reasonably sure you’ve already gotten your first kiss.)
READ MORE 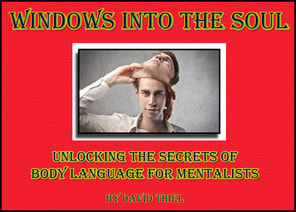 Windows Into The Soul: Unlocking the Secrets of Body Language for Mentalists

Know what people are feeling just by looking at them!