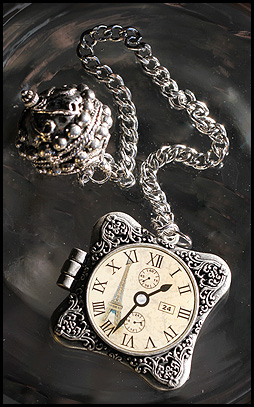 The Time Traveler: Sold Out!

SKU:
$0.00
Unavailable
per item
He stopped cold. His eyes grew wide in terror.

Did he bring it? They had said not to show up without it.

Sebastian patted his coat pockets, a feverish movement, his hands fluttering and slapping. His eyes grew even wider as terror filled him. Saliva dried in his mouth making it hard to swallow.

Had he forgotten it?

He tore off his coat, dropped it to the ground, and searched his pants pockets.

Cold realization made him panic. They would kill him if he showed up without it. They said they would. He checked his pocket watch. It was too late to turn back. He still had a few minutes, but not enough time to go home and back again. They had also said not to be late.

Sebastian stared up the cobbled street as it wound its way through a cold fog of amber glow cast by the gaslight lamps. Storefronts lined the street, their signage barely visible. He peered into the murk.

Was there an answer here? Then he saw it.

Gypsy Fortunes told here!
Pendulums of Fate! Crystals of Destiny!
Got a Problem? Bring it to Madame Sheladril!

He certainly had a problem.

He hurried up the street.

He stopped outside a door and peered in through the hazy glass. The shop was illuminated by the glow of many thick-bellied candles, their slimy wax pooling on the plates upon which they sat. Dusty cobwebs clung to much of the merchandise: cow skulls, dried black bats, shrunken heads, vials of dark shimmering liquid, eagle wings, bear claws, heavy prisms hanging from braided silk cords, books and more books, thick tomes with rich mahogany covers and thick raised imprinted titles. Sebastian shook his head. He could not make out the words. Then he saw them—pendulums—made of all metals, all shapes and sizes. Hope soared through him.

His father had died the year prior. On his deathbed, he blessed his only son, had reached out, taken Sebastian’s hand, unfurled his fingers, and pressed his only valuable possession into his son’s hand—a pendulum, a wonderfully queer piece that had been passed from father to son for hundreds of years. “Keep it safe,” his father had said, his voice cracking as he spoke. “Promise me that it will stay in our family.”

Sebastian had always coveted the beautiful piece with its long, strong silver chain, the odd decorative silver ball on one end and the timepiece bob on the other. He loved the weight of the piece, loved the mesmerizing quality of it as it swung from his fingers in the lamplight. He had been so pleased to receive it.

When the call came out that a secret knighthood was looking for apprentices, apprentices who were already versed in the art of dowsing, Sebastian applied. He told the grand master about his father’s pendulum, how many centuries it had been in the family, and he was soon accepted into the sect, perhaps a little too quickly, and only on the condition that he arrive at the appointed time WITH his father’s pendulum.

How could he have forgotten it? Maybe it was fate? Fate that had made him forget?

He pushed open the door to the shop.

At first, he stood in the quiet dusky room alone. He listened for sounds of someone moving around in the back, but all he could hear was the sound of a grandfather clock, its pendulum tocking, tocking back and forth.

Sebastian suppressed a scream as he turned to stare at the hag that had appeared behind him. “I—I—I …” he stammered, willing his heart to slow its frantic pounding. “You scared me,” he finally gasped.

“So I did,” the old woman observed with just a hint of sarcasm. She slid into a wide armchair, its green velvet upholstery now dingy with use, and its armrests worn and shiny. As she settled her bulk into the chair, dust rose from the seat cushion making Sebastian cough. He waved at dust motes that danced around his head. The woman looked him over like a lazy lion evaluating its prey.

“I need a pendulum,” Sebastian blurted. “Are you Madame--?” He was cut off.

“It must be exactly like the one my father gave to me.” Sebastian described the piece.

“Jerome?” the old woman asked.  Sebastian jerked back a little. “Your father?” she added.

Sebastian sat. He nervously glanced at his watch. “I am in a bit of a hurry.”

“Uh, a meeting…with some people.”

The old woman raised her eyebrows and then leaned back in her chair. “I don’t make pendulums for THOSE people,” she said, firmly and coldly, and with great finality. “Did your father not tell you that you were never to give your pendulum away?”

“Don’t lie to me, boy.” There was a slight threat of some penalty for lying in her voice.

“I...th-th-they are going to kill me,” Sebastian sputtered.

The old woman pulled herself from her chair, grunting with the exertion of getting her great bulk upright again. She waddled to the pendulum display. She walked past it, and disappeared into a back room. Sebastian worried that she was not going to help him. But after a short moment, she reappeared.

In her hand she held a pendulum identical to his father’s. Sebastian breathed a sigh of relief and reached greedily to snatch the pendulum from her hand. In an instant, it had disappeared behind her back.

“I am going to pay you,” Sebastian offered. He held up his watch. “I have to go. They said not to be late.”

“And I told you that none of THEM will ever hold one of my pendulums.” She stared at him with narrowed eyes, daring him to challenge her.

“But I have been accepted. I have to go. If a new apprentice doesn’t show up, they hunt him down and KILL him.” Sebastian’s voice rose an octave and fear made it squeak. “I don’t want to die.”

“You won’t die and you won’t give this to them,” she said. “Hold out your hand.”

Sebastian did so. He felt the weight of the pendulum in his palm. He closed his fingers around it.

“Do you promise not to give this to THEM?” the woman asked.

Sebastian nodded eagerly. “I won’t give it to them.”

Suddenly, the room changed colors as it swirled about him. He swayed and blacked out.

When he (you) awoke, you were holding the pendulum. And in your ears, you heard these words:

“Use it wisely, use it well. For if you lie, time will tell.”

(Imagine the possibilities. You or your character can awaken anywhere, at any time, in any place. The rest of the story is up to you.)

The fee above includes shipping anywhere in North America. For other locations, please email us and we will send you a PayPal invoice.