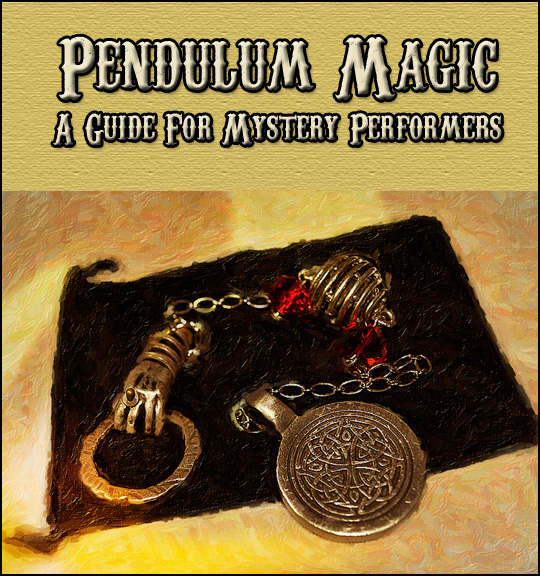 Improve your performances with a single read! Pendulums can be a powerful tool for a professional entertainer. You'll not only get a great introduction to HOW some of the biggest names in the business use pendulums...you'll also get their hard hitting routines, hand-picked to suit performers who are newer to using pendulums.

You get six routines from some of the top names in mentalism today. But more than that, you'll get insight in how to introduce pendulums to your audience, how get off-the-charts reactions from spectators as pendulum magic happens in their own hands and how pendulums can be used in concert in conjunction with some other props you already have.

This isn't a theoretical book. It's loaded with routines and ideas you'll use performing close-up, parlor or stage. Each section was designed specifically for this publication by by a different working pro, and features tips, crystal clear explanations and the kind of creative energy and ideas that will take your performance to the next level.

You'll get six solid routines from some of the biggest names in mentalism...each effect starring a pendulum:

Pendulum Plus by Richard Osterlind: For the first time this mentalism legend releases his personal pendulum routine. But it's much more than a routine. It's a revolutionary system that adapts itself to a myriad of applications. Richard shows you step by step how to train your spectator to use a pendulum. Then Richard shows you a practical high-impact prediction routine that will blow your audience away. A very easy effect to perform. Pendulum Plus is a masterwork.

El Brujo by Paul Prater: You're familiar with this name if you do Bizarre mentalism or magic shows. Paul's one of the top designers of the kind of effects that leave audiences breathless. He's built a solid reputation by blending spooky elements, straightforward methods and memorable surprises into his presentations. El Brujo tells the dark tale of a man who goes to a shaman with a simple stomach complaint...

Grandmother's Present by Vic Nadata: If you do Outlaw Magic's Classic Luna series of book tests, or if you've taken your audience on a journey with a ghostly little girl named Lillian, then you're already familiar with the name of Vic Nadata. His work has set new standards for book tests...and he steps it up a notch with "Grandmother's Present." A perfect lead-in to a seance or a stand alone routine that will make them shiver. This one sends your guests on a treasure hunt to find a letter written from the other side of the grave... Grandmother's Present blends story, effect and method into one seamless package -- the exact kind of presentation you've come to expect from Vic Nadata.

Do As I Do by Mauricio Jaramillo: His client list reads like a who's who of corporate America. One of South America's busiest mentalists, Mauricio has designed a routine that will leave them talking LONG after you've left the building. The mentalist finds an object hidden on one of five matchboxes...and then passes the pendulum to a spectator to set the audience up for an even bigger surprise.

T'was The Season by TC Tahoe: TC Tahoe is known for his work with tarot card magic. He's an award winning performer with a career that encompasses everything from cruise ships to corporate stages all over the world. This routine shows you how to make the kind of impromptu pendulum magic that makes jaws drop. See how a polished performer using no prepared props managed to bring the house down one enchanted Christmas evening. Adaptable to nearly any occasion, any venue.

What a Woman Wants by David Thiel: The performer chooses a woman from the audience and shows her images of five ways a man might win her heart. He allows her to choose one of the cards and uses a pendulum to reveal that choice. A great comedy routine with lots of interaction. "David has come up with a very nice and effective routine. I have been playing with it since he sent it to me and am very impressed with what he has done. I recommend this without hesitation." (Bob Cassidy commenting on What a Woman Wants)

Pendulum Magic: A Guide for Mystery Performers kicks off with not one but two great introductions:

Why Pendulums Rock! is David Thiel's often hilarious tale of one performer's discovery of pendulums...and his burning desire to know EVERYTHING about them. These over-the-top notes come to you from one of mentalism's funniest men.

Pendulums: Under-rated, Underused...AMAZING! You've worked with Rich Hennessey if you've ever purchased an item from MentalCraft. Rich's pendulum designs include antiquities: Roman coins, ancient pottery sherds and arrowheads. Here Rich talks about incorporating ancient artifacts into pendulum design and his own journey toward using and creating them!