Crap I Think About..."Sharkbait" (A non-magical tale or woe) 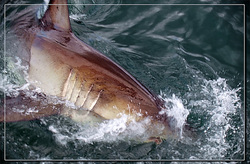 (Sheree and I went on a photo safari in South Africa a few years ago. This story is from that trip.)

Here’s the idea: you put on a wetsuit. One of the crew members tosses a decapitated tuna head into the water, affixed to a tow rope. Another crew guy spills a steady trickle of fish guts into the water. Since we are in South Africa's “Shark Alley” – the cunning plan is to draw as many sharks as possible so that when we get into the “shark cage” the sharks will come along, expecting to eat something.

“You should go in,” says Sheree…who is the only one who wanted to do this whole thing in the first place. I vividly remember looking at the brochure, rolling my eyes and wondering briefly what kind of moron would be stupid enough to pay money and actually go into shark infested waters ON PURPOSE.

“Yup. I’m going to take pictures from here. Do something I’m not doing,” she says.

I decide not to point out that I do lots of things she doesn’t do: peeing standing up, for example. But I have already made up my mind to go into the cage. I am, after all, paying two hundred dollars so that I could get up a little past four, and finish my morning in the water with sharks. My mom didn’t raise any idiots. (Well she did…but I am not one of them.)

“All divers must pick up their wetsuits on the first deck,” says the captain, an affable craggy faced man who drops tourists into shark water for a living.

With one final thought of “What the HELL ARE YOU DOING???” I join the line up of brain dead prospective chum donors. Most of them are twenty-somethings from around the globe. There are several blond gym bunnies and their attending frat boy/muscle head/young-guys-who-can’t-seem-to-keep-their-pants-up companions.

The captain sizes me up and hands me a wet suit. It’s sopping wet and heavy and looks like it’s designed for someone of more conventional size. (I am a touch rotund.) I look at the rubber scrap with perfectly reasonable skepticism.

He nods and responds “Ja Ja” which is South African for “Yes Yes.”

Someone shuffles impatiently behind me. I turn and see one of the belt-challenged steroid-popping muscle mountains peering out at me with beady piggy little eyes that seem to say  "Yo, dude. Like take the wet suit and go already. This waiting is killing my buzz." I glare at him for a second and turn my attention back to the captain.

The captain nods and his eyes flick to the line up behind me. He's reminding me that people are waiting.  I sigh, cave and take the wet suit.

I go to the head to put it on – having no desire to do what I am certain will wind up being a very undignified procedure in front of the gym bunnies.

A few moments later, I am standing locked in the tiny room with the outer space looking toilet in my underwear, That's when the ship takes off. It seems to me they could give some warning…that someone could call out: “Hey Disgruntled Little Fat Guy In His Underwear In The Head: We Are Planning To Take Off With a REAL Joyful Spurt of Speed Now.”

I lurch to one side, banging my head on some mysterious pipe, begin cursing anyone and everyone as someone knocks on the door.

The fricking wet suit is inside out. I pull at it, still as dubious as an elephant contemplating a napkin tutu…but the idea of bravely facing sharks in their own environment without peeing my pants sustains me. Okay. Let's be honest. The idea of not wasting a penny of the two hundred bucks I'm paying for this mess sustains me.

I settle onto the tiny toilet seat and thrust one leg into the wet suit. No. That’s not the right word: I TRY to put my leg into the leg hole and am stopped by clammy rubber. It feels slimy and cold. Goose bumps erupt on my skin. But I am determined. I am the Great White Hunter.

I try to work the rubber over my leg and it isn’t going.

Someone knocks again. The boat lurches to one side. I bang my head again. Shit.

I have the wet suit leg almost up to my knee now and am slowly working the rubber down my ankle.

Sheree forgot her sea bands somewhere. And I have taken seasick medication…so I gave my sea bands to her. And the head is starting to smell bad. Diesel fumes? Poop? Sea? I stop my brain right there, resolving NOT to think about it. For the love of God: don’t go there. Nossir. Four fricking hours on the fricking water surrounded by gym bunnies…and me heaving my guts into the water? No way the Great White Hunter will be seen like that. Nossir.

One leg is finally on...kind of...and I must now raise my other leg, while balancing one butt cheek on the toilet seat in the rocking boat while I try get my other foot in.

The boat pitches again and my precarious balance is disrupted and I slide off the toilet and, with a fleeting thought “this is really gonna hurt,” slam onto the hard metal floor.

I am pinned on the floor, one leg straight, the other bent at a vaguely unnatural angle because I can’t get it through the rubber. I try to think through the motions that will allow me to get up. I brace my hands on the toilet seat (don’t even think about it)…and the almost smooth wall and shove. It almost works, but the boat runs into another ice burg and it lurches and I thump to the floor.  Angry flames of heat flare at various delicate parts of my person, giving me advance notice of where the bruises are going to be tomorrow.

Fury charges my muscles and, in the midst of a fifty-something tantrum I thrash and shove that fricking leg forward with all that is within me and am rewarded by the appearance of a big toe…nearly…at the bottom of the leg. The knee pad is still around my ankle…but I choose to celebrate the small things.

Seizing the moment, I struggle to my feet and try to thrust my arms through the microscopic arm holes. Does the head actually stink more than it did a minute ago? Are they piping the diesel fumes directly in here? Who the hell is smoking? Are they hitting waves on PURPOSE?

I am suddenly and without warning in the familiar position of being driven to the floor, only now I have one arm trapped under me.

“Piss off,” I call out cheerily.

Arms are easier than legs and I get both of them into the wet suit ...and realize there’s no way I can stand up. The rubber traps me in a forward leaning position and I look like I should be ringing the bell at Notre Dame, not facing down sharks.

No way this suit is the right size.

After a few moments I am dressed and I go up top, tossing the stupid wet suit into a corner of the cabin, my face a mask of disdain. No one notices. I sigh and look for my wife.

I find her. Sheree shrewdly observes. “You’re not in a wet suit.”

I just look at her.

“They didn’t have my color.”

I regard  her for a long moment. It's my most intimidating "I've had enough. Don't even THINK giving me any crap" look. Grown men have been known to pee their pants when I lay THAT look on them. Probably.

Sheree is not intimidated. She smiles and then and goes back to snapping pictures, enthusing about what wonderful shots she’s getting, completely indifferent to my recent suffering and obvious need for a touch of human comfort.

I shrug and  tell myself to relax and take pictures. So I do.

This is one of them.
~ ~ ~ ~ ~
This story is from my non-magical book called "Crap I Think About." I'll be posting different stories every week. Their sole purpose is to make you smile and thank you for coming by Magical Pendulums. The site for book is here.